My husband came home from work a few weeks ago, asking for a 1st birthday card for a lady that he worked with, as someone she knew had a wee girl who was turning one, so wanted to give her a card.  I didn't have anything made up, and didn't really have anything to make one with either.  I remember seeing a cute stamp set recently, so decided to order it, so I could make some of these cards. 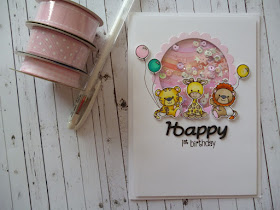 It was a stamp set called Petite Plushies by Clearly Besotted, it has some very cute animals, some in nappies, but what I like the most, is it has animals facing both ways and sitting front on, so you can use them in all sorts of positions on a card. 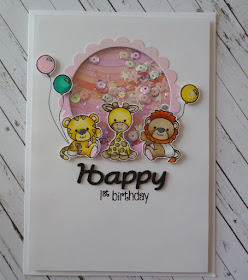 I made the shaker part of the card with a circle die and a scallop die that I cut out of a piece of card that was sponged with distress inks picked raspberry and spun sugar.  I then cut out the centre of this with the same circle die that I had cut the circle out in my card panel, this made a frame to go around the aperture for the shaker part.
To make a background for behind the shaker, I took two post-it notes and put them facing each other with the sticky parts together and cut a curvy design out with scissors, this meant the the top and bottom parts of the post-its when I put them on a piece of card, leaving a small gap between them, were perfectly shaped top and bottom.  This gap I then ink sponged between, and then moved the bottom post-it up to cover the inked part and then move the top up leaving the same sized gap, and inked again with another ink colour.  I continued to do this up the card until it was high enough for my shaker circle, and then worked my way down from the point I started until I had gone down far enough.  The colours I used were Distress ink colours picked raspberry, spun sugar, abandoned coral and Altenew crisp ink colours cotton candy and perfect peach.  The idea for this background had come from a video I had seen recently from Jennifer McGuire who did a rainbow inked striped background for some cards, and then I got the idea for a curvy line from a card I had seen on a blog called Mikey's Mum by Ros Crawford.  She did one with 3 colours in bigger wavy stripes, which I loved the effect of.
I glued a piece of acetate to the back of my front panel, and the scalloped frame to the front of the panel.  I then glued fun foam scraps to the back of the panel around the aperture and the rest of the panel, filled the shaker space with a mix of pink, white, clear and silver sequins and stars.  Then stuck the inked background to this, that was glued to my card base and that was the basic shaker part done.

I stamped a range of the animal stamps and some of the balloons that come in the set, with versafine onyx black ink onto white card and embossed them with clear embossing powder and then coloured them with some Renoart alcohol markers I have.  (I only own a couple of copic markers)
The colours I used for them will be below in my supply list.
I cut them out leaving a small white border and stuck them around the shaker part of the card with some foam tape. I also put some glossy accents onto the balloons and the animals noses. 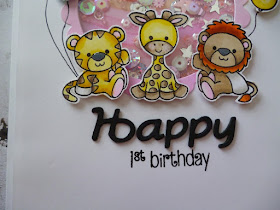 The sentiment I stamped the 1st birthday sentiment which is also in the stamp set, again with versafie onyx black ink and embossed with clear embossing powder.  The 'Happy' sentimet was a found an old Quickutz alphabet die set I have had for years and cut out 4 of each letter and glued them together in a stack, so they made a more dimensional sentiment. 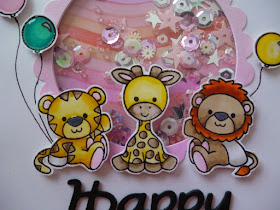 That finished the card. 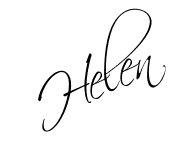